Home  ›  Wine Blog  ›  The Superiore Side of Prosecco

The Superiore Side of Prosecco 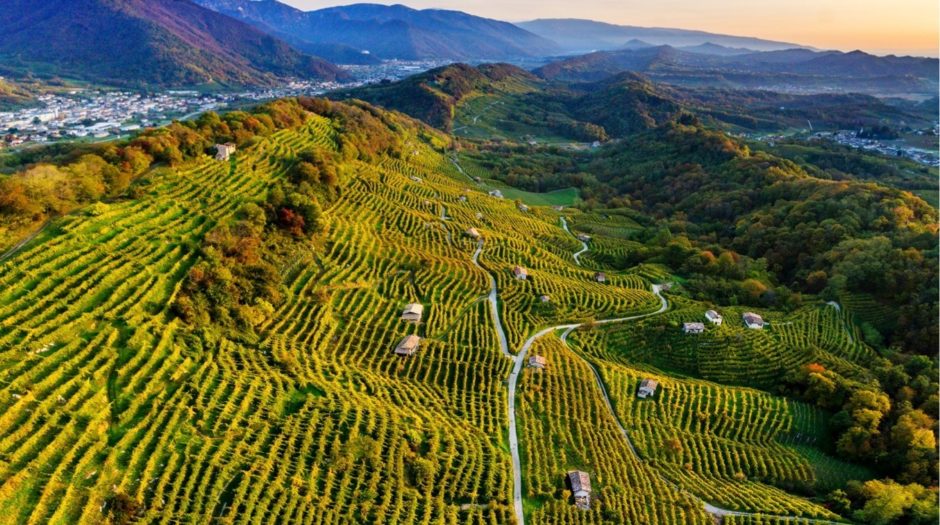 Let’s chat about Prosecco. Most of us are familiar with the popular Italian sparkling wine. Here in the States it’s synonymous with cocktail parties as an aperitif or as the fizz in those weekend brunch mimosas. However, there is a lot more to understanding the popular sparkler than one might think. From production method to classification, understanding the differences may just shed a new light on Prosecco – and may have you drinking it without the OJ and even with a meal (as the Superiore DOCG is intended)!

Prosecco comes to us from northeast Italy and from two primary classified regions, Prosecco DOC and Conegliano-Valdobbiadene Prosecco Superiore DOCG (additional classifications include Prosecco DOC Treviso and Asolo Prosecco DOCG). Prosecco is typically produced from the Glera grape, with varying percentages of other local and international varieties and is produced via the tank method, or Charmat method, by which the second fermentation takes place in a pressurized tank (versus the traditional method in which this happens in the bottle). The tank method helps to preserve the fresh fruit aromas and flavors of the wine. Prosecco DOC covers a wide range of the Veneto and Friuli areas, whereas the Conegliano-Valdobbiadene Prosecco Superiore DOCG wines must be grown between the two towns of Conegliano and Valdobbiadene.

As is typical with any classification system, the main differences in quality are owed in large part to where the grapes are grown and the rules (or lack thereof) by which they’re produced. So, let’s take a look at the Conegliano-Valdobbiadene Prosecco Superiore DOCG and why in 2009 these wines received the top-quality DOCG designation. As previously mentioned, the Superiore DOCG wines must be produced from grapes grown between the two towns of Conegliano, in the east, and Valdobbiadene, to the west. This Italian region lies about 50 kilometers west of Venice and 100 kilometers south of the Dolomites and includes 15 communes, which have been producing wine for more than three centuries. In addition, the communes of Cartizze and Rive can be named specifically on the label as they are known for their exceptional vineyards.

The hills of this region run east to west with vineyards growing on the southern slopes and forests on the northern slopes. The landscape is known for its geological “hogback” landscape, whereby movement of the earth’s crust over millions of years formed layers of rock which moved together and collided with the Prealp Massif. Over time, these layers eroded and produced the dramatic hills, valleys and ridges found here. As you might expect, the soils formed here have ancient origins stemming from both glaciers and the sea and can include fine-textured sediments, marl and sandstone depending on the vineyard. It’s these soils, combined with the natural slopes that help to drain the rain that falls heavily in the summer months, while the ever-present breezes help to dry the vines and prevent disease.

Viticulture and Vinification of Superiore DOCG

The vineyards of this region are grown on steep slopes in a terracing system known as “ciglioni,” in which plant cover instead of rocks are used to stabilize the slopes and prevent erosion. These vineyards are also highly fragmented between growers, forests and fallow land to promote a healthy ecological environment. As for the growers, most are small, family-owned properties of which there are more than 3,000! And owing to the steepness of the vineyards, most of the Superiore DOCG is hand-harvested (this is mandatory in Cartizze and Rive). To lend perspective to the vines cultivated on the slopes, it typically takes 600 hours annually to tend one hectare of vines, versus 150 hours annually to cultivate a hectare in the valley.

Once the grapes are harvested, they are brought to the winery for a gentle pressing of only free run juices. In the Superiore DOCG only 70 liters of juice can be extracted for every 100 kilos of grapes, and 85% of the resulting wine must come from Glera grapes. This cloudy juice is then left to rest for a minimum of one night in stainless tanks, or until the natural clarification has taken place. Once clarified, the juice will then undergo primary fermentation by natural yeasts in stainless tanks for two to three weeks. The wines of the Superiore DOCG will then undergo secondary fermentation in pressurized containers, but as this is the DOCG, they will be monitored closely to perfect the timing and to retain the fragrances, freshness and balance between the acidity and sugars. This fermentation generally takes place in less than four weeks at which point the wine is bottled under pressure and rests for one to three months before market release.

With the vast array of Prosecco options available for purchase, knowing what to look for will help in selecting the right wine for the occasion. When it comes to Superiore DOCG, the first thing to look for are the identifiers on the bottle’s label. Here you’ll want to look for the name of the region, “Conegliano-Valdobbiadene,” or one of the two, which is followed by the words “Prosecco Superiore.” If it comes from one of the exceptional vineyards of Cartizze or Rive, those names will also be indicated. In addition to the bottle’s label, Superiore DOCG wines will have a government neck strip indicating its authenticity and DOCG quality status.

Next, you’ll want to note the style of Prosecco, and this is often where people get confused. The terms Extra Brut, Brut, Extra Dry and Dry indicate the level of sugar and resulting sweetness in the wine – and they may not be what you think. Here’s a quick run-down with a few suggested pairings for each:

Finally, when serving your Prosecco Superiore DOCG (or even Prosecco DOC) it is best to do so within the same year as harvest to preserve the intended fresh fruit flavors. Serve the wine between 32 to 36 degrees Fahrenheit and from a larger tulip shaped glass rather than a typical flute. The more open mouth of the glass will help to enhance the aromas of the Superiore DOCG. In fact, some wine glass producers even make a style specifically intended for Prosecco Superiore. And lastly, remember, not all Proseccos are created the same, nor are they meant to drink like Champagne. These crisp, zesty sparkling wines are intended for presenting the freshness of the fruits and in the case of Superiore DOCG, the culture of wine preserved in the region for centuries.

Kristy Wenz is a wine writer and WSET Diploma candidate.